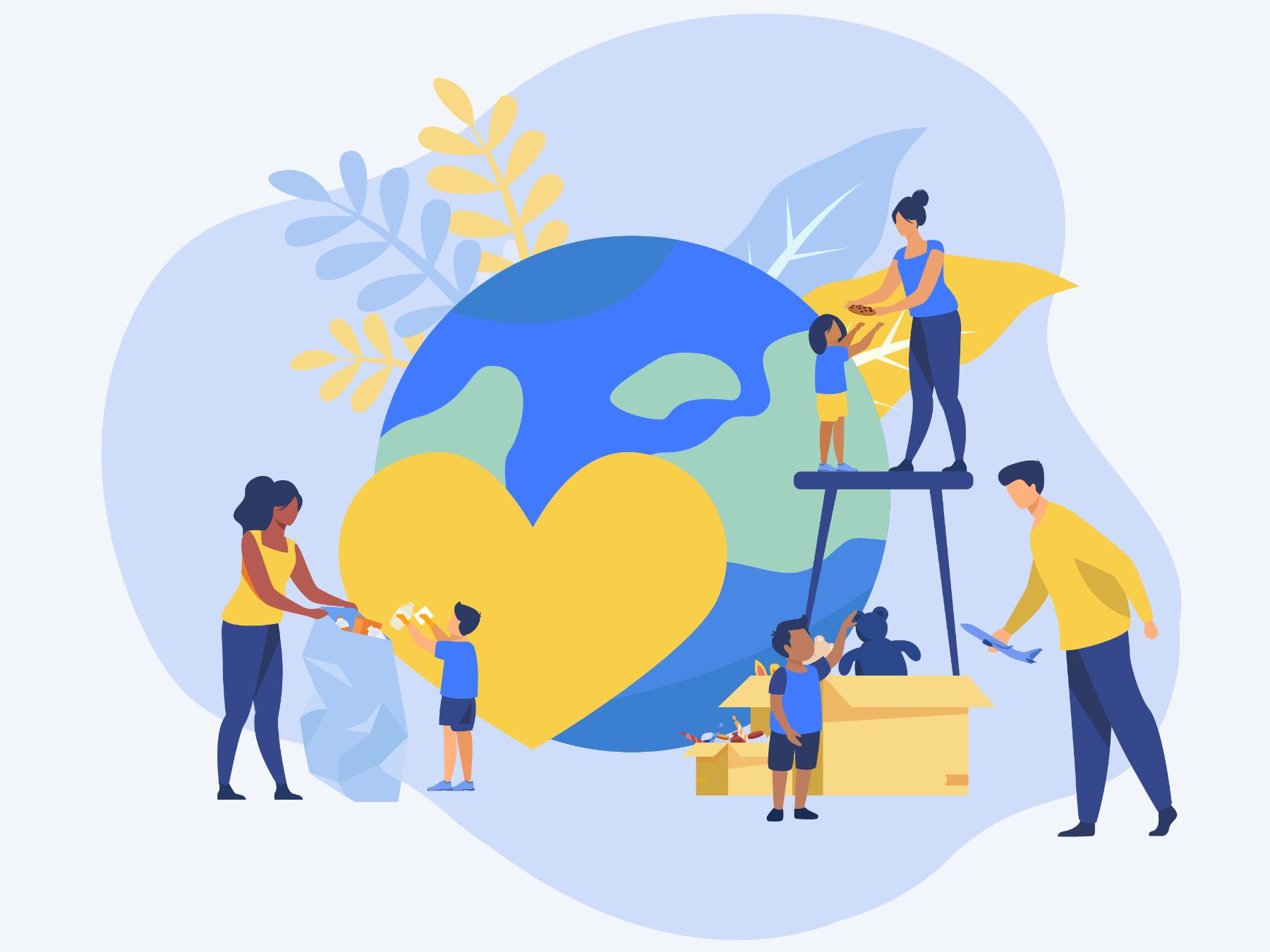 What is morality anyway? Collins Dictionary describes it as the shared societal belief that some behaviours are right and acceptable, while other behaviours are considered wrong and unacceptable. Do infants and young children have the ability to make judgements on moral character, like adults do? When does this start to emerge? By understanding how morality develops in young children, we can give parents and caregivers the proper tools they need to guide their children towards building a strong foundation of morals and beliefs that will best prepare them in becoming healthier, happier adults.

As adults, we know that if a person does something nice (or mean) in one social context, that person will do something nice (or mean) in another social context as well. What we’re curious to explore is whether this understanding of moral character also exists in infants and young children. For instance, do children and infants believe someone who does something nice or mean will also act this way across different social contexts? Originally, it was thought that children don’t make judgements on the moral character of others until adolescence, however our studies show these moral judgements may be happening a lot sooner in kids than we realize.

Characterizing people based on their moral character traits

We want to see if infants and children have already begun to make associations between moral character traits, specifically fairness, helping and trust, and whether they expect a person possessing one trait to also possess another trait. In other words, do infants and children expect people who are fair to also be helpful and trustworthy? Will they be surprised if someone who was fair at first is unhelpful later?

Questions like these are from two of the many exciting online studies we run at the Toronto Early Cognition Lab (TECL) with the University of Toronto. TECL (www.tecl.ca) is a developmental research lab that studies the origins of social, cognitive and moral development in infants and young children. We have fun and educational online studies for kids in the form of picture stories, videos and computer games, perfect for kids ages 1 to 10 years old!

Are people who are fair also helpful and trustworthy?

In our study for 4- to 7-year-old children, ‘How Do Fair People Act?’, we look at whether kids expect someone who is fair (specifically, she distributes an equal number of cookies to 2 other people), in one social context, to also be helpful (by helping someone open a box to get a toy) in another social context. Children are shown one of four possible scenarios of an adult acting consistently across 2 social contexts (fair then helpful or unfair then unhelpful) or inconsistently (fair then unhelpful or unfair then helpful).

We’re interested in the expectations children have about moral characters and whether they link fairness and helpfulness across different social contexts, so we show them one of the above possible scenarios and ask if they find that scenario surprising. If children make inferences about moral character, we expect them to be more surprised when an individual acts inconsistently across contexts, than consistently across contexts. 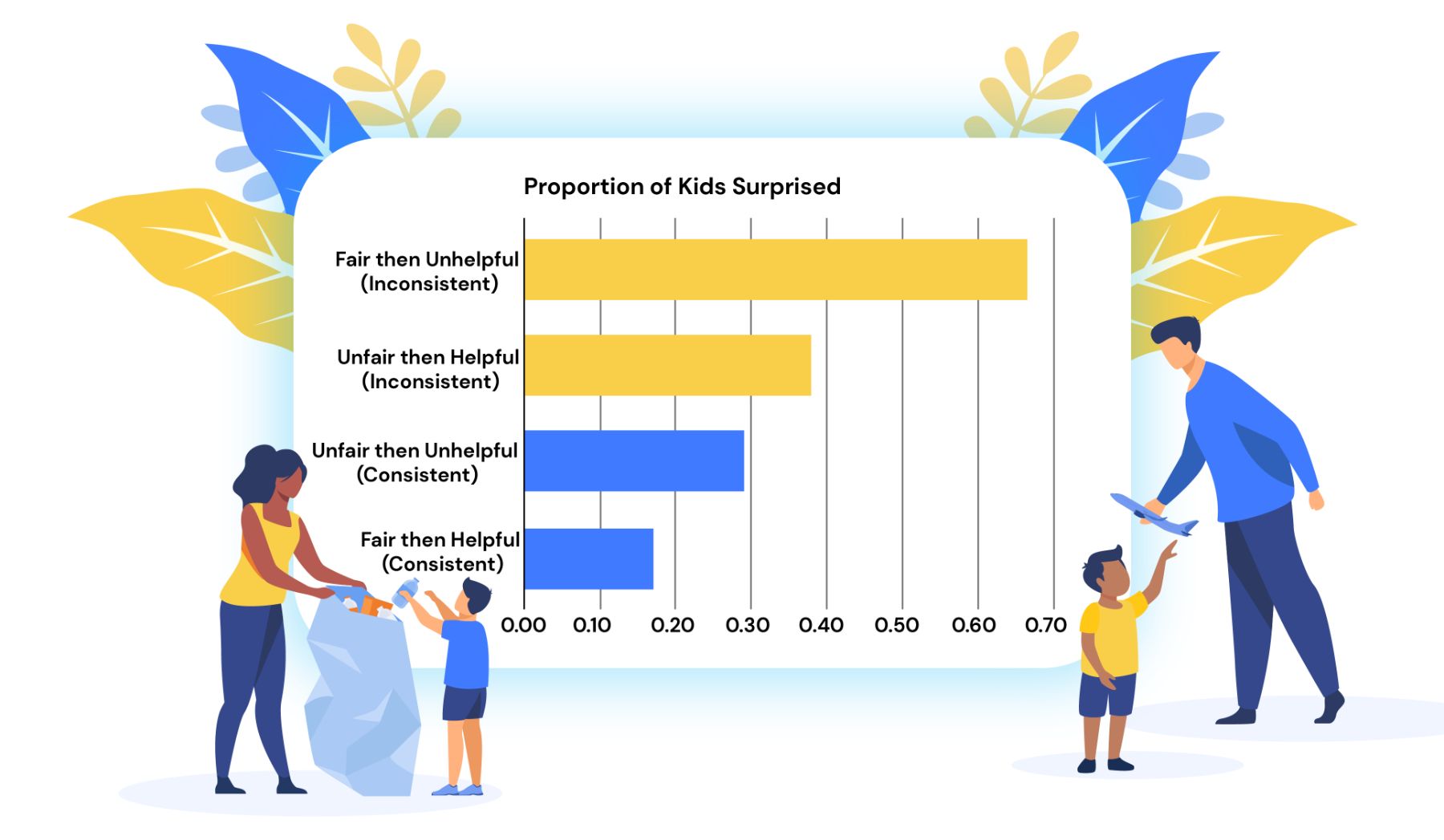 Overall, we found that children were more surprised by the inconsistent scenarios (see orange bars) than the consistent scenarios (see blue bars). Kids were most surprised (67%) when they saw an individual acting fairly (distributed an equal number of cookies between 2 people), who later behaved in an unhelpful way (thwarted someone’s goal of opening a box to get a toy). We also saw the second-highest level of surprise when kids first saw an individual acting unfairly, and then later displaying helping behaviour (38%).

In contrast, children were less surprised if the individual acted consistently across contexts. If the adult demonstrated unfair behaviour and then was later unhelpful, children were not very surprised (29%), suggesting they hold some expectations of future interactions with someone who is unfair. Only 17% of kids noted being surprised when the adult was acting fairly, and then followed through with helping behaviour.

Our results seem to suggest that kids expect individuals to act in a consistently nice or mean manner across scenarios, suggesting that they make inferences about moral character. If they see someone acting fairly at first, they expect that individual to also be helpful. We can also see similar responses from children where they expect someone who was unfair to then also be unhelpful. This evaluation of moral character can guide children in their every day decisions about who to avoid and who to interact with. Children do in fact make social predictions in order to navigate their social world, guiding them towards pro-social individuals, and avoiding anti-social individuals.

In another ongoing study ‘How Do Babies Understand Fairness?’ with 12- to 24-month-old infants, we are asking whether the tendency to expect individuals to act morally consistently across contexts is present early in life, by using infants’ eye gaze to make inferences about what they find surprising.

We have fun studies for kids of all ages!

TECL has many fun, interesting at-home studies for kids 1 to 10 years old on a number of research topics about helping behaviour, parent-child relationships, persistence, and intentions about morality.

If you and your child are interested in being a part of our research, we’d love to hear from you! Our studies are usually a 30-minute Zoom call, scheduled at a time that works best for you. You receive a $5 Amazon or Indigo e-gift card, and U of T e-certificate as our thank-you!

Check out our studies in the links below to participate now!

We are the Toronto Early Cognition Lab (TECL) located at the University of Toronto St. George Campus. We study social, developmental, and cognitive psychology in infants and children up to 8 years old.