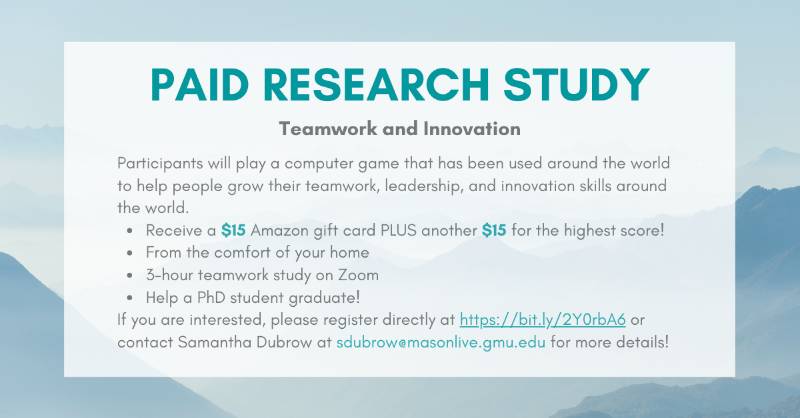 This research is being conducted to better understand team behaviors and shared ideas about teamwork and leadership. If you agree to participate, you will be paired with two other team members and a research assistant on a Zoom chat. The study will begin with a survey asking questions about yourself. You will then receive an informative packet and two training videos that you will watch with your team. After the reviewing the training videos and a packet of materials, you will answer a second survey. The surveys, training videos, and packet reviews are expected to take one hour. Then, you will begin to play a computer-based simulation game, which is expected to take two hours. During the game, you will be asked to answer three surveys about the game. The game has been used around the world to train executives and students to work together in teams. The game itself is expected to last about two hours, and the entire experiment will be under three hours. In the case that four participants arrive for the study, one participant will be asked to complete an alternative task, which will include viewing TED Talks related to leadership and answering short answer questions about the videos.

There are no benefits to you as a participant other than to further research regarding teams and leadership.

Laptop/Desktop computer with audio and camera

This study has been approved by George Mason University's Institutional Review Board: [IRB: 1499496-5]

This study doesn't require any in-person visits. Complete it in the comfort of your own home!

You must be a resident in United States, North America to join this study